Nahko and Medicine for the People- Take your power back 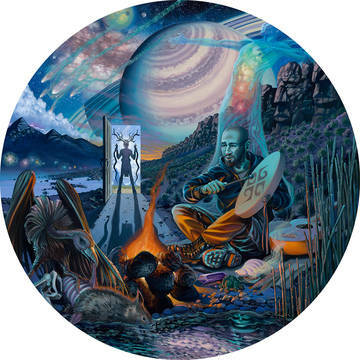 Nahko and Medicine for the People is an American world music group. The six-member band is headed by frontman Nahko Bear

10" Vinyl Record, limited edition picture disc - Includes 20x20 Poster featuring original art by MEAR1 - Includes letter from artist - Includes Download Card // In a career built on reflective, deeply personal songwriting, Nahko's extraordinary new album, 'Take Your Power Back,' stands as far and away his most profound, revelatory, and fully realized collection yet. Recorded in Los Angeles and Executive Produced by cut&dry, the record grapples with grief, trauma, and reconciliation, learning to face heartache head on and embrace the peace and serenity that comes with understanding and acceptance. As heavy as all that may sound, 'Take Your Power Back' is as uplifting and infectious as anything Nahko has ever released, blending socially conscious folk and rock with soulful,alt-R&B,genre-bending production. It's an album of growth, of courage, of resilience. It's a testament to the beauty and evolution that can come from fully inhabiting our pain, and it's proof positive that our true power-spiritual, physical, and emotional-inevitably comes from within.V10